Football injuries are the focus in Brazil

Professor Mackay was delighted to be invited to attend the Inaugural Team Physician’s Controversies Meeting in São Paulo, Brazil in September: ‘I had never been to South America, however, I was enticed by a superb Faculty, chaired by Dr Moises Cohen, surgeon to the Brazil national football team. I was amused to be described as ‘The Godfather’ of the Faculty. The Faculty itself was composed of eminent surgeons from throughout South America, as well as Dr Riley Williams from The Hospital for Special Surgery and Daryl Osbahr from Florida.

Landing in São Paulo was an experience as its population creeps towards 20 million. I had the pleasure of being welcomed by Cohen and was thrilled to receive a gift and a personal video message from Pelé who is undoubtedly one of the world’s greatest sporting legends, a hero of mine and a true footballing ambassador. This in itself made the trip to Brazil entirely worthwhile!

It was my to start the meeting with an overview of how the InternalBrace has changed my treatment and outcomes for athletes. This led to an open debate before individual cases were presented and discussed and I was happy to participate as a panel member talking about numerous case scenarios. It was a fresh format that involved real players with a focus on football, as well as some general athletes.

The second day got off to a brisk start, looking at the role of ortho-biologics in elite athletes, in particular, platelet-rich-plasma (PRP) and stem-cell applications.

With the day’s academic activities behind there was a ‘Sports Medicine’ spotlight when Cohen introduced three Brazilian stars, who shared their experiences as players and their ambitions going forward, for the Brazilian Footballing Association – addressing concerns of the male and female game.  In particular, it was a pleasure to meet Mário Silva who won the World Cup for Brazil in 1994 and Milene Domingues who was a lead player in her own right and in demonstrations of ball skills.

The second day got off to a brisk start, looking at the role of ortho-biologics in elite athletes, in particular, platelet-rich-plasma (PRP) and stem-cell applications. An overview was provided by Dr Williams, who has particular experience of injured athletes in the Hospital for Special Surgery.  The day again concluded with surgical techniques, focusing on InternalBrace applications. An excellent presentation from Giovanni Carcuro on InternalBracing for ankle ligament repair was followed by an overview from Daryl Osbahr on medial collateral ligament repair of the knee. Osbahr is a specialist in Surgery, based in the Orlando Health Institute in Florida. He talked about how this has impacted on his practice by accelerating patient recovery.

I then had the pleasure of presenting my experience on AC joint reconstruction for instability using the InternalBrace to enhance stability and address horizontal laxity as well as speed up recovery. Cohen then concluded meeting proceedings and I had the opportunity to offer him a small gift, as well as a Mackay Clan Sgian Dubh for him to give to the great man, Pelé.

Socially, São Paulo was a wonderful experience, meeting friends and surgeons from all areas of South America and enjoying local cuisine. Jackie and I then spent a couple of days in Rio, visiting key landmarks such as the stunning statue of Christ the Redeemer, we played football on Copacabana Beach and visited the famous Maracanã Stadium which has hosted the World Cup Final several times and still holds the record for the world’s largest crowd – 200,000 at the Brazil World Cup Final against Uruguay in 1950.

The most striking memory of our visit to South America was the wonderful warmth and friendship of the people we met, we are looking forward to visiting again. 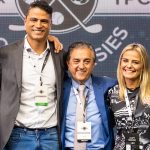