Research innovations to the fore at OTIF 2020

I was delighted to be invited to the Innovation & Technology Forum which is one of the best meetings in the Orthopaedic Calendar.  It was particularly special this year as it was celebrating the official opening of Arthrex’s new Education & Innovation Campus.  A truly remarkably surgeon-focused facility.  I was particularly interested in having an update on research and outcomes from Coen Wijdicks which gave an insight into the process of translational research and evidence-based innovation.  I was also interested in the example used to illustrate best practice, which was the development of the InternalBrace™ augmentation for ACL reconstruction over the last 5 years and its progressive application internationally.  He explained that there have been 220 global surgical skills workshops for surgeons to focus specifically on this technological advance.

Once again the importance of surgical outcomes and patient satisfaction was highlighted and the value of the SOS system which I use routinely in my Practice.

The first session on rotator cuff pathology addressed innovations to optimise healing and strength and gave insight into some of the best cellular therapies available.  I was particularly interested to hear Matthew Ravenscroft speak on his innovative BAR technique for massive irreparable cuff tears.  It looks very promising, for this very challenging sub-group of patients.  Advances in anchor technology were also discussed to improve surgical techniques, and the importance of knotless technology was emphasised.

The Upper Extremity Sports Trauma session continued with discussions of cartilage restoration, followed by an excellent session in ligament augmentation using the InternalBrace™ for hand and wrist applications.  Steven Lee described how this has transformed his Practice with over 10 applications, with particular focus on stabilisation of dislocated thumbs and unstable wrists.  The added advantage of the Nanoscope for accessible imaging was also discussed.  This was followed by Jonathan Barlow from The Mayo Clinic who shared his experience with the traumatic elbow and the importance on restoration of ligament balance, augmented with the InternalBrace™ and he discussed his surgical outcomes and associated improvement in detail.

The Upper Limb session was concluded with a panel discussion on the management of complex cases with prominent speakers such as Neal ElAttrache from the Kerlan-Jobe Clinic in California.

The first day concluded with a dinner that celebrated some sport surgery legends including John Bergfeld, Moises Cohen, Peter Indelicato, and Michael Stuart.  The Moderator, J T Tokish once again was a superb compere, putting all of his guests at ease and poking fun equally at all of them as he reflected on their extensive and impressive careers.

The second day of the Innovation Technology Forum got off to an early start with an initial focus on Lower Limb Trauma.  Outcomes and focus on syndesmotic injuries highlighted the need for early recognition and appropriate intervention using new technologies such as the knotless tightrope and InternalBrace™.  The improved patient outcome and accelerated recovery was evident and highlighted with appropriate case studies.  This was followed by an excellent presentation by Chris Coetzee, former President of the American Foot & Ankle Association who discussed accelerated return to play following lateral ankle injury.  He explained how he now routinely uses the InternalBrace™ to protect his repair, to accelerate recovery.  He talked about the perils of early protection for wound healing, then accelerated recovery and return from 2 weeks.  He was able to share his surgical outcome data and his published results using this technique.  The benefits were clear for the surgeon and patient.  This was followed by a complex trauma panel discussion and a couple of key points were highlighted, such as the significance of Achilles pain often indicative of syndesmotic disruption as well as the importance of arthroscopic assessment, especially with a Nanoscope which is often more effective than imaging, due to the ability to dynamically assess fibular stability.  It was interesting that not only separation of the tibia and fibula is relevant, but also AP glide.

Focus then turned to the role of ambulatory surgical care and advances in meniscal management, in particular, the importance of increasingly recognised root repair and the associated improvement in knee stability and outcomes when this is addressed.  It would appear that lateral root tear, in particular, is often under-diagnosed at the time of cruciate injury.

Orthobiologic and cartilage restoration in the lower extremity followed with an excellent overview initially of the current role of PRP, stem cell and Hyalgan.  This was followed by a fascinating insight into the potential role of Secretomes which was presented by Dr March, a Research Cardiologist from Florida’s Regenerative Medicine Department.  Non-operative management of osteoarthritis was discussed in detail, as well as areas of future research.

Focus then turned to the role of ambulatory surgical care and advances in meniscal management, in particular, the importance of increasingly recognised root repair and the associated improvement in knee stability and outcomes when this is addressed.  It would appear that lateral root tear, in particular, is often under-diagnosed at the time of cruciate injury.

Live surgical demonstrations focused on the role of the Nanoscope using the 2 mm diameter camera system to minimise soft tissue trauma.  Patrick Smith, a leading Knee Surgeon, illustrated ACL repair with the InternalBrace™ using the Nanoscope.  This was certainly the highlight of the live surgery session.

The afternoon session focused on ACL repair and reconstruction, including how innovative technologies, in terms of cutting instrumentation, bone graft and an InternalBrace™ can be used to address complex revision situations and Dr Lee Pace provided a comprehensive overview.  The key session focused on the emerging role of the InternalBrace™ to augment not only repairs, but all reconstructions whether patellar tendon, hamstring or allograft.  Even the emerging interesting quadriceps tendon would be enhanced by the routine use of this augmentation.  Patrick Smith described his outcomes and the significant reduction in re-injury rates with the implementation of this technique.

The final session of the day was the most instructive, focused on collateral ligament reconstruction and illustrated with complex cases.  Dr Armando Vidal from the Steadman Clinic discussed his approach to collateral ligament injury and the role of the InternalBrace™ to augment his posterolateral corner repair.  This was followed by an amazing presentation by Bertrand Sonnery-Cottet which clearly illustrated the importance of not treating the ACL injury in isolation and the associated soft tissue injuries which he illustrated beautifully with a 3 Dimensional model.  He also provided the evidence and outcomes to support the role of anterolateral ligament reconstruction at the time of ACL reconstruction for primary repair, rather than just applying in a revision situation.  He explained that there is evidence of anterolateral ligament disruption in over 87 % of primary ACL injuries.  This is categorical evidence that will change orthopaedic practice globally.

I had the pleasure of chairing the final session on Complex and Revision Knee Trauma and ligament injury with a leading panel, including the three individuals named above, the with addition of Karl-Heinz Frosch, Professor from Hamburg.  We discussed the excellent cases which were exceptionally challenging from all four experts, including bilateral knee dislocations and combined spinal lower limb trauma.  They provided insight into their management and protocols, but also top tips regarding innovative techniques.  Bertrand Sonnery-Cottet described his approach, using the Versailles technique for posterolateral corner repair, and an excellent technique for anatomical MCL reconstruction.  He also emphasised the importance of incorporating the residual tissue, in particular, the meniscus, to prevent functional extrusion during recovery.  Dr Frosch presented a challenging case due to skin injury and previous trauma, which necessitated arthroscopic only reconstruction and he was able to carry out complex posterolateral reconstruction and he shared the technique.  In particular, he emphasised how to identify the popliteal attachment and protect the peroneal nerve during this ‘all inside’ surgery.  The final trauma case was presented by Dr Levy from The Mayo Clinic, emphasising how the latest technologies and innovations have allowed him to deal with the most complex multi-trauma in terms of fracture management and associated multi-ligament reconstruction.  The ‘all inside’ technique with dock tunnels, augmented with the InternalBrace™ prevented excessive crowding within the joint and unnecessary bone and soft tissue destruction.  This concluded a fabulous meeting.  This was an appropriate tribute to a designated centre for Innovation Technology & Surgical Education.  It reflects a 40-year vision of Reinhold Schmieding, President & Founder of Arthrex. 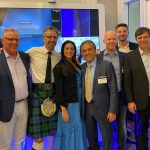 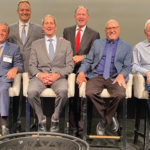