Since the invention of the InternalBrace knee injuries which would once have sidelined sportsmen and women for whole seasons, or kept people off work for many months, are being repaired with remarkable speed

InternalBracing of the medial ligament

The InternalBrace offers a simple percutaneous way of restoring temporary stability as the medial ligament heals. This not only ensures anatomical length, preventing attenuation during early phase recovery, but can facilitate early mobilisation which prevents secondary detrimental changes to the joint, which also improves soft tissue strength and accelerates healing.

If this is carried out at the time of an ACL reconstruction, the balancing of the joint can also improve the accuracy of the ACL repair or reconstruction and, in theory, will minimise the risk of misplacement and surgical failure. It is important to note that a medial ligament managed conservatively at the time of ACL repair can often increase the risk of ACL rupture because the strain is transferred from the lax medial ligament to the restructured graft.

InternalBracing is also an attractive option when the knee is being rebalanced after arthroplasty and in the presence of a deficient medial ligament. It is also possible to do a double strand InternalBracing, which replicates not only the superficial fibres of the medial collateral ligament but also repairs the posture oblique ligament, thus providing stability. 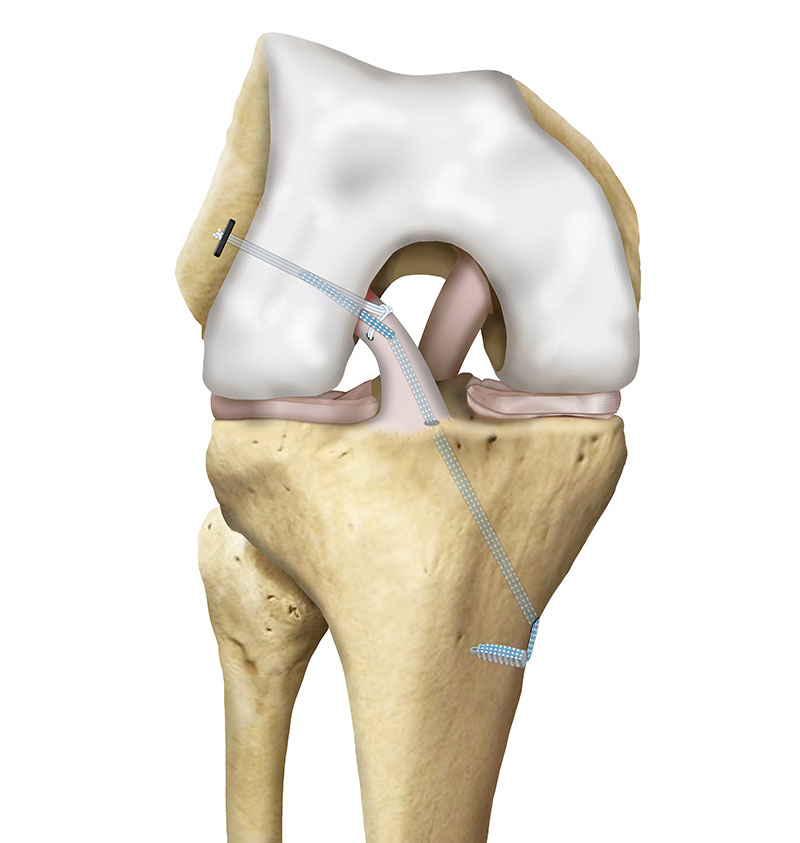 Some forty years since the importance of the ACL was recognised in terms of knee stability, surgeons have sought a way to restore knee stability kinematics – and ultimately function – after injury.

Initial attempts to repair the damaged cruciate ligament directly end-to-end were disappointing with only a third restoring satisfactory function, although at this time material technology was poor and a prolonged period of immobilisation was required to protect the repair, which often resulted in permanent dysfunction and the requirement for open surgery. Our understanding of the anatomy of the ACL was also relatively poor.

Pioneering surgeons such as John Fagan and Dr Steadman explored the possibility of microfracture to facilitate healing as well as augmentation. It was found that using autologous graft tissue such as hamstring tissue or patellar tendon restores stability. It was assumed that the environment of the knee itself was too hostile, possibly as a result of the synovial fluid to facilitate healing.

So, for the last thirty years we have focused on using effectively dead tissue harvested from other areas in the body to replace the cruciate ligament. This has involved drilling through bone and securing soft tissues, but unfortunately this has failed to prevent arthritic change, which has long been associated with ongoing instability.

Biological advancements and an increased understanding of cellular function have identified the importance of nerve cells within the cruciate ligament called mechanoreceptors. These receptors identify stretch and fire hamstrings automatically to protect the knee and ultimately the cruciate ligament. Unfortunately when these are removed surgically this reflex is lost permanently and never fully recovers.

Interestingly, the medial ligament, which continued to be managed conservatively, was considered capable of healing even if the tissues were attenuated, because of the inherent scaffold. Animal studies went on to show that if a scaffold could be positioned appropriately then cruciate ligament in animal model could indeed heal.

This was transferred to the clinical setting using the InternalBrace and our understanding of anatomical graft placement. Material technology provided an inert construct tested within the body, including intra-articular environments. Unlike failed synthetic grafts in the past, the InternalBrace was only 2mm in diameter, causing minimal iatrogenic injury, and did not attempt to replace the cruciate ligament itself.

It provided temporary stability and a scaffold for healing but the outcome was entirely dependent on this healing process. Remarkably early studies have shown that after twelve weeks, not only is there radiological evidence of ACL healing but functional testing has shown that athletes have been able to replicate pre-injury scores at twelve weeks and in certain cases exceed their pre-injury score. This function and the restoration of normal kinematics could not be achieved with a standard ACL reconstruction as commonly accepted.

This opens a whole new horizon for knee surgeons and their patients. Long-term follow up is still desirable, but patients have been followed up now to in excess of four years with no evidence of knee detrimental reaction. If the InternalBrace is excessively tightened there is some crepe within the fibre tape itself measuring up to 3mm if loaded at 300 newtons. There also is a potential for some modest slippage past the swivel lock fixation in the tibia which could result in compensatory rebalancing. The knee however, is always tensioned gently in full extension to prevent any over constraint.

Patients have witnessed much improved outcomes, less pain, less swelling and less muscle wasting, plus an early return to work or sport. Most significantly, ACL repair and InternalBracing does not in any way preclude a standard ACL reconstruction being carried out if the soft tissues fail to heal adequately. On the first thirty patients followed through, only one patient has actually required a definitive ACL reconstruction in the traditional manner.

As a patient resource we filmed this detailed video of keyhole ACL Repair surgery using the InternalBrace. ACL Repair is very different to an ACL Reconstruction. It is less traumatic for the knee joint as it does not involve the drilling of large bone tunnels. It also offers patients accelerated recovery and return to sport or activity.

Patellar dislocation is a frequent problem, but 70% can be corrected by proximal soft tissue realignment. If the tissues are not considered adequate, then hamstrings are often harvested as formal patello femoral reconstruction is carried out. This causes donor site morbidity and also places dead tissue over the patellofemoral ligament which has to be protected during its period of remodelling and revascularisation. This can result in irritation, muscle wasting, and wound complications.

The InternalBrace can provide an attractive alternative for borderline cases as the soft tissue which has been injured is still present and a similar model to the Brostrom repair of the ankle can be tensioned and re-applied to the patella using bone to soft tissue fixation. This, of course, is insufficiently strong to allow early mobilisation, but the InternalBrace does protect the repair, preventing attenuation during early mobilisation. It provides a low-profile augment without the donor site concerns.

Tissue balancing, however, has to be carried out first of all with the InternalBrace laid simply on top, with the proximal stand secured on extension and more distal component of the “V” support fixed in 30-40 degrees of flexion. This can allow mobilisation as soon as satisfactory quadriceps control is restored.

Want to know how fast you can return to work or drive, following InternalBrace surgery? We answer all your questions on our IB FAQS page

We have all the answers to your questions

With InternalBracing modification early mobilisation would be undertaken and this ensures excellent function and much improved recovery within a three-month (as opposed to six- to eight-month) timeframe.

InternalBracing of a Posterolateral Corner of the Knee

Alternatively, since the injured tissues were still present but have been stretched to failure, restoring posterolateral corner stability with an InternalBrace mimicking the lateral collateral ligament and the soft tissues drawn back to the head of fibula and freshened to facilitate healing and repair can be a successful compromise which dramatically improves recovery without associated morbidity. This is particularly true in the acute situation as it provides immediate stability and confidence to the joint, although an external brace may still be added during the first four to six weeks in particularly severe cases of soft tissue disruption.

The lateral collateral ligament acts as a post which has to fail to allow the rest of the tissues of the posterolateral corner to be formerly disrupted. The InternalBrace provides a simple, minimally invasive alternative because conventional reconstructions are often associated with a very poor outcome, with less than 60% of patients returning to their previous level of sporting activity.

InternalBracing of the Anterolateral Ligament

While the widespread adoption of InternalBrace technology is revolutionising the treatment of ligament injuries, it is by no means the only major clinical advance in this area. However, one technique in particular is working particularly well when used in conjunction with the InternalBrace.

A few years ago, after studying 48 knee joints from human cadavers over three years, Belgian knee surgeons Dr Steven Claes and Professor Johann Bellemans announced the existence of a “new” ligament. The incredibly thin 4cm-long anterolateral ligament (ALL) runs up the outside of the knee, while the anterior cruciate ligament (ACL) runs through the knee from the shin to the back of the thigh. It is this ALL ligament, it appears, which provides the knee with a good deal of its stability.

If the ALL has also been ruptured, which happens frequently during an ACL rupture, an extra ligament or InternalBrace replacing the torn ALL can be attached to the outside of the knee by way of screws drilled into the bone below and above the joint. The strengthening or replacement of the ALL has proved to be the key to stabilising the knee after an ACL reconstruction, and is a valuable technique which can be used in conjunction with an InternalBrace to provide even greater strength and stability for the reconstructed knee.

Watch some of our InternalBrace surgery patient stories