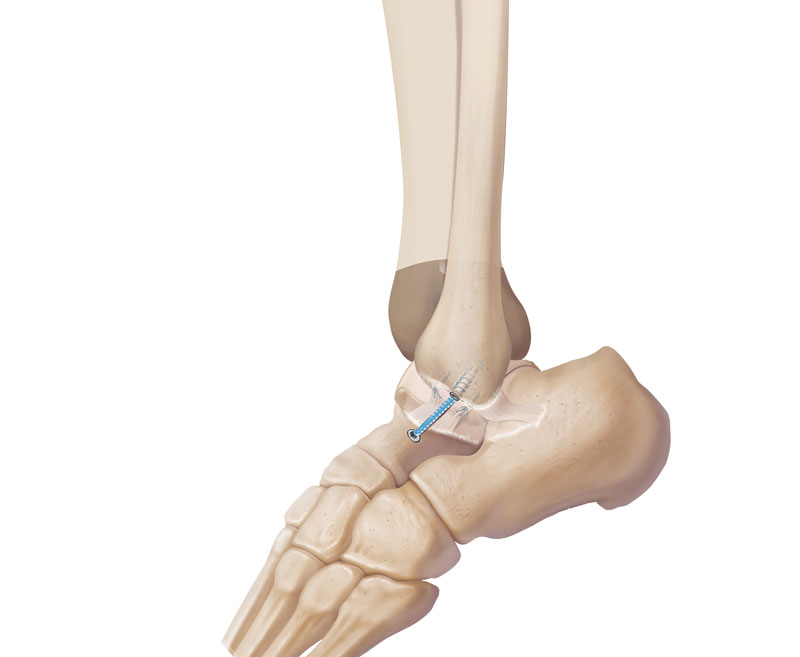 Ankle ligament injury is recognised as one of the most frequent sports-related injuries, often resulting in long-standing instability and secondary degenerative change within the ankle joint itself.

Direct surgical repair was traditionally reported as unsuccessful as the soft tissue repair to bone was too weak and non-anatomical repairs came in to fashion. This often involved drilling holes through bone and weaving donor tendon, often resulting in a stable ankle but a loss of function, pain and an increased risk of arthritis. Recovery also required an extended period of immobilisation as the dead tissue became revascularised.

An advance on this approach was the restoration of normal anatomy using the Brostrom approach, but this still required abnormal tensioning of the tissues with tightening of the retinaculum the prolonged period of immobilisation. It was anticipated that these tissues would stretch with time although most recent studies following with a nine-year follow up of patients following Brostrom repair found that only 58% were still performing at pre-injury levels of sport.

The InternalBrace is a five minute addition to a standard Brostrom procedure allowing augmentation principally of the anterior talofibular ligament although the calcaneal fibular ligament can also be augmented in situations of chronic deficiency, grossly obese patients or those returning to contact sport.

The InternalBrace restores immediate stability, providing equivalent strength to the uninjured anterior talofibular ligament. This transforms the patient’s experience by diminishing pain and swelling, restoring function rapidly and can reduce recovery times by 50%. We have had sportspeople returning eight weeks after ligament reconstruction, although the average recovery period would be ten to twelve weeks.

The successful principals of InternalBrace technology can also be applied to the medial aspect of the ankle to reinforce the spring ligament in patients who have developed flat feet. This can be used to augment partial trend and transfer, simplifying surgical repair of the spring ligament but also providing additional confidence for early mobilisation and an accelerative recovery.

In a similar fashion, the deltoid ligament medially can also be repaired without the morbidity of donor site harvest minimising the risks of soft tissue and wound breakdown. 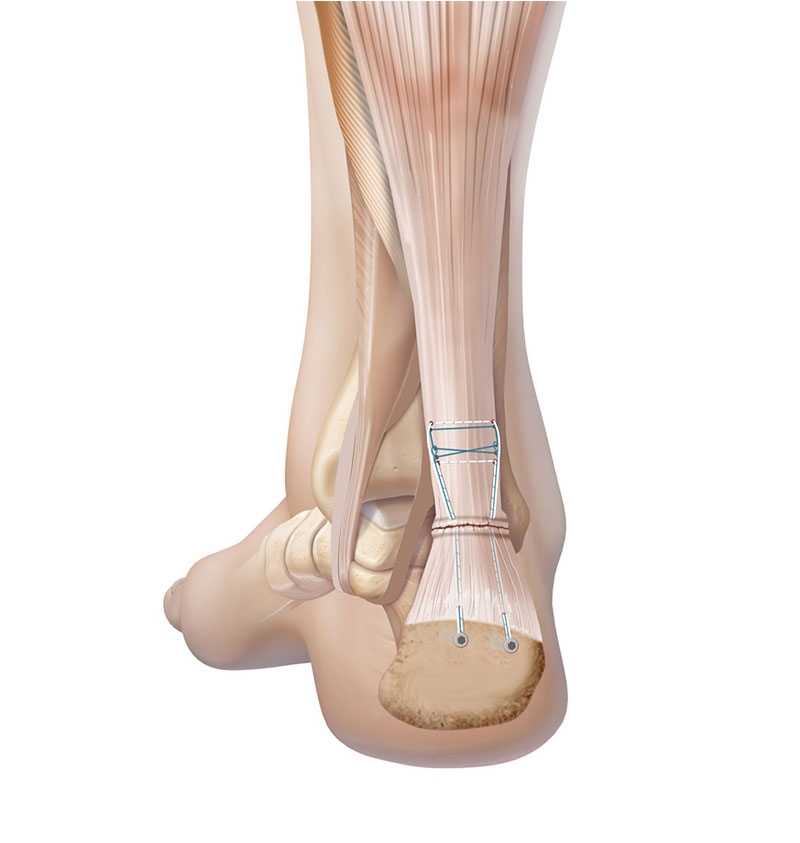 The Achilles tendon remains an area of some controversy as traditional outcomes following surgical management have shown modest improvement over conservative treatment with some well-recognised risks, including wound infection, although the risk of re-rupture was noted to be considerably lower.

The InternalBrace for Achilles repair has transformed surgical outcomes, ensuring the restoration of musculo-tendinous length and providing a repair which is at least three times as strong as a conventional repair. This allows early weight bearing and mobilisation which in turn accelerates healing, minimises wasting and pain and restores function.

It is a knotless technique which avoids the difficulties of tensioning several knots simultaneously and also removes the strangulation and ischemia from the rupture site. The technique involves fixation of the healthy soft tissues proximally and the transfer of the bridging cabling through the damaged tissue before being fixed to the calcaneus using swivel locks in a neutral position. The soft tissues can then be gently tacked around the scaffold.

The results have been dramatic, not only ensuring minimal muscle wasting in optimal outcome but achieving this in less than half of the conventional time period if it was ever to be restored.

You will find answers to the questions we are most frequently asked about the InternalBrace for the ankle below, but for more information go to our FAQS page

We have all the answers to your questions

HOW SOON WILL I BE ABLE TO RETURN TO ACTIVITY FOLLOWING IB ANKLE SURGERY?

ON AVERAGE HOW SOON WILL I BE ABLE TO RETURN TO WORK FOLLOWING IB ANKLE SURGERY?

For a desk job 2-4 weeks, for a more physical job 6-8 weeks with modified duties

ON AVERAGE HOW SOON WILL I BE ABLE TO DRIVE FOLLOWING IB ANKLE SURGERY?

2-4 weeks – as long as you are comfortable and confident carrying out an emergency stop.

CAN I HAVE MORE THAN ONE LIGAMENT AT A TIME INTERNALLY BRACED?