Our sponsored skier Iain Innes has been very busy since his last update so it was great to get this latest bulletin from him.

“Since I last updated you I have spent nearly a month training and racing in China, 10 days back in Austria, and a short break visiting my family at home in Edinburgh. The time at home was much needed and, I would like to think, well earned after nearly two months on the road, living out of my collection of suitcases and ski bags.

The trip to China was an incredible experience. my first long haul flight since I was a small child, I saw a whole new continent I’d never been to, I experienced the coldest temperatures of my life so far (-35°C not taking into account wind chill). The cold alone was an experience in itself, I actually never spent long enough outside to feel cold in terms of core body temperature, because after every run I would rush into the ski lodge for a break, the main issue was protecting your skin from burns. Obviously, I wore a full ski suit, boots, gloves, helmet, and goggles, but that leaves your cheeks, mouth nose unprotected. To overcome this issue we used physio “” tape to protect our skin, this worked well, but any unprotected skin was intermediately burnt when skiing at decent speed. People’s ski boots, shin guards, helmets etc. would crack in half just from the cold.

Now, onto the more exciting news, I competed in 11 races over there, scoring an PB of 40 FIS points in slalom and multiple Personal Bests s in GS with the best two being at 23 FIS points (The lower the points, the better). I also managed to get three podiums, all in GS, all silver medals, second only to Korea ’s strongest World Cup skier, and Olympian, Jung Donghyun. The highlight of my trip was definitely my silver medal in the Far East Cup race as all of the best skiers from Asia and Russia were present, as well as a few other Europeans, and I was lucky enough to have team-mate Robert Poth on the podium with me! Of course, another massive part of the experience is the people I met, having made new contacts from Poland, Slovenia, Korea, Australia, Slovakia Japan

Upon arrival back in we went straight to our new base for the season in Schladming, Austria for a few days off to readjust to the change in time zones before we started training again in Reiteralm where the conditions were excellent. We trained for 3 days alongside the German, Austrian and French European Cup teams in preparation for our final races of 2018 in Altaussee, two giant slaloms. The weather was not in our but we managed to race the first day, in windy and rainy conditions, where I managed a decent score of 33, but I was far from satisfied. Unfortunately, the next day was due to extreme weather conditions which maybe a blessing in disguise as it meant we wouldn’t be leaving bags full of wet gear in Austria while we flew home for the holidays.

I have now just finished a training block out here, skiing in Obdach and Reiteralm, Austria, alongside the best skiers in the world, on some the hardest, iciest snow conditions I have ever experienced! Yesterday we ran a decide which Brits would race in the next few European Cup races, have 3 slots for 6 racers, and I’m very happy to say I , just behind 2 of the older boys who have been on the World Cup tour thus far in the season! I will be racing in the GS European Cup events in Reiteralm and Kronplatz, as well as a few others in France later this month.

I hope to be updating you soon with more good news soon.

Thank you for your continued support, 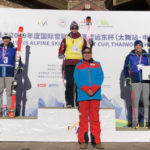